Saturday 3rd November, 12 noon.
Eileen will read and perform poems of conflict and sorrow, war and destruction but she will also speak of the joy of peace and those things that bring light and hope into even the darkest of places.

An exhibition of remembrance and commemoration to mark the centenary of Wilfred Owen’s death and armistice day. Artwork inspired by conflict and peace.

Eileen’s work, in this exhibition and for her PhD, is centred around the theme of conflict, local and global, past and present, and conflict resolution. She approaches the subject through the prism of her experiences of the Troubles in Northern Ireland, first expressed creatively through her poems on the Troubles and she is currently exploring how the symbiotic relationship between stitch, sound and word can be used as vehicle to express the tragedy and horror of conflict and its counterpart, healing.

The Picturemakers were asked  in 2013, by the Curator of The Radnorshire Museum, to produce an exhibition to commemorate the centenary of the start  of the first world war.  The interpretation of the subject matter was left for individual artists to determine.  A number of the resulting paintings, drawings and prints are closely based on actual photographs taken at the time and inspired by the war poetry that gave witness to this catastrophic world changing event.  Selected poems are displayed with the art works and add poignancy to the exhibition.

The subject of the exhibition, ‘Remembering The Great War’, thus closely mirrors Wilfred Owen’s words;- ‘My subject is war and the pity of war.. my poetry is in the pity’.

The exhibition was first shown at The Radnor Museum in Llandrindod Wells in 2014 and subsequently at The Wyeside in Builth Wells, The Morlan Centre in Aberystwyth and The Mid Wales Arts Centre in Caersws.  It will be shown for the fifth time at the Willow Gallery as part of The Wilfred Owen Centenary festival to mark his death and Armistice day November 1918.

On display in the Willow : Dennis May. Spring Offensive. Print

My ceramic sculpture was made after the terrible chemical attack on Douma in Syria in 2013.

A short video on the theme of War and Peace. The original artwork was completed on long scrolls of paper and depicted scenes and imagery drawn from a variety of media sources. The completed work has been directed and produced by the artist and is a short commentary on war, conflict and remembrance.

A group of proposals for the Wilfred Owen memorial from local artists. 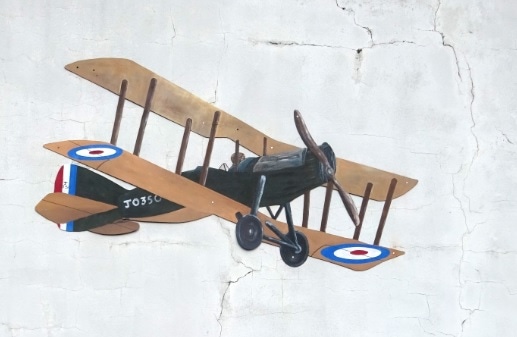