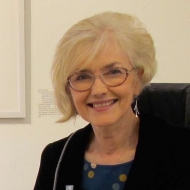 This user has not added any information to their profile yet.

Captivated by colour and the rhythms of hand stitch, I exhibit widely in Wales and England, including London. I write and perform poetry, am undertaking a PhD in Fine Art at Aberystwyth University and was awarded funding by the Arts Council of Wales to develop work in word and music.

Inspired by light falling over the hills of the beautiful mountains of Snowdonia that surround her home, in many of her pieces, Eileen seeks to interpret moods of nature and atmospheres of weather. In these interpretations of the natural world, she expresses not just her pleasure in the colours and light of land and sea but also her concerns around ecology, producing installations in stitch, sound and word. The doctoral work that she is undertaking at the university witnesses to how she is moved by the drama of humanity and in her work overall, she seeks to give expression to what lies within, inviting the viewer to contemplate possibilities beyond perceived reality.
Eileen's pieces reflect her working process of multi-media in which hand stitch plays a principal role and these working process take on a cyclical nature in which she often moves between stitch and word, one medium inspiring expression in the other. She began working in hand stitch as Fine Art due to the onset of the neurological condition that affects her muscles and she finds that the absorbing, contemplative rhythms of stitching by hand is a medium that daily affords her rich seams of creativity.

The West in Her Eye
Poems by Women Ed. Rachel Lever Pyramid Press

5th – 10th April 2012
Details from The Invitation – Church of Our Lady of Seven Sorrows, Dolgellau, Gwynedd

2009
Tabernacle Art Competition : Any line or lines from Edward FitzGerald’s translation of the Rubaiyat Of Omar Khayyam – MOMA Machynlleth, Powys

Eileen grew up by the town of Bangor, Co. Down on the shores of Belfast Lough, living within sight and sound of the sea and she obtained a Joint Honours BA in Art and Italian from Aberystwyth University. After graduation, she worked for several years in Belfast at the height of the Troubles, moving to England on marriage in 1981.
Together with her husband, Eileen made her home in N. Wales after bringing up their daughter and son and she returned to her university to study part-time for her MA in Fine Art.
On obtaining the MA, Eileen stayed with Aberystwyth University to pursue a PhD in Fine Art which she is undertaking on a part-time basis while continuing her exhibition schedule. The PhD sees her exploring working in Belfast during the times of violence and bombing and in this, she is investigating not just her own autobiographical experiences but also those of others, doing this through the visual processes of photography, stitch and print and also through the media of sound and the spoken and written word.